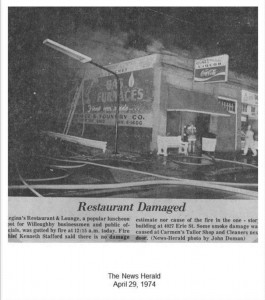 Before getting out of his cruiser, the officer thumbed the red button on the microphone.

“Tell the fire department to step it up, Willoughby.”

He had made his way north on Erie Street, through a canyon of century-old brick commercial buildings and stopped just short of Route 20, confident his cruiser was far enough away from Regina’s Restaurant and Lounge, that its green paint wouldn’t blister from the heat. It was just after midnight on Monday, April 29, 1974.

We got our assignments as soon as we arrived on scene.

“Langley!” Fire Chief Kenneth Stafford shouted over throttled-up diesel engines and blaring radio traffic, “You and Tackett get in there and do the primary search. I got a report there might be people in some kind of side room.”

At age 21, my firefighting experience could be measured in weeks. Cecil Langley was closer to 30 and his experience was measured in years. He had to be less than thrilled to get me as his partner since, other than in training, I’d never been in a real structure fire before.

With enough air in our SCBA tanks to last for about 20 minutes, Cecil leads as we crawl low through the front door of Regina’s without the protection of a hoseline and begin a right-hand search. Keeping in touch with the wall to our right with a gloved hand, we begin feeling for doorways to rooms and possible fire victims.

Crossing over the attack crew’s hoseline, moving deeper into the smoke, I can make out ghosts of orange flame above the blurred outline of a bar. I’ve never felt heat like this before, not even in training fires, and I can’t stop my mind from previewing what it must be like to be burned alive.

“Sure is getting hot in here!” I say loud enough for Cecil to hear. My voice, muffled by the SCBA mask, competes with the noise of breaking glass, rushing water, hissing steam, and the mask-muffled voices of the attack crew yelling to each other. I want him to tell me I’m correct in my assessment. I want him to tell me that it’s time to get the hell out before we both burn up. But all he says is, “Yep.”

We continue our search as the orange glow above the bar grows bigger. Since the ventilation crew hasn’t yet opened up the roof, the concentrated heat and smoke spreads across the ceiling and banks back down on top of us. In spite of Cecil’s calm reassurance, I feel like I’m starting to cook.

“It’s really getting hot!” I say, wishing we had our own hoseline for protection now.

“Yeah, it is,” Cecil replies firmly. “Just stay low and stay with me.”

Although he may have thought I sounded like I was getting ready to bolt, he didn’t have to worry. I had already made up my mind that I’d stay in here and burn to death before leaving him. I just hoped it wouldn’t come to that.

Continuing our search for a victim or a door to a side room, we both see the fuzzy outline of the attack crew shuffle past us in the opposite direction, taking the only hoseline in the building out with them.

Cecil and I are now the only two people left inside a building burning out of control.

“Time to get out,” he says matter-of-factly.

Crawling back over mounds of soggy collapsed ceiling tiles, broken beer bottles, and pushing past overturned chairs and tables, I follow Cecil toward a rectangle of hazy white light and head toward it. We stand up after reaching the door and as we walk away from the burning building, I follow Cecil’s lead by pulling the silicone mask off my face, releasing the straps holding my tank, and dropping the assembly to the ground. Next, I removed my steaming turnout coat, careful not to burn my hands on the hot metal spring clips.

Cecil and I cool off, while a crew on the roof finishes cutting a hole that vents enough heat and smoke so attack crews can re-enter the building and put the fire out. Only then do we discover that the reason we couldn’t find the side room in question was because it had had a sheet of paneling covering the doorway to make it look and feel like part of the wall. The room, we were told, was used as a hideout from spouses and police.