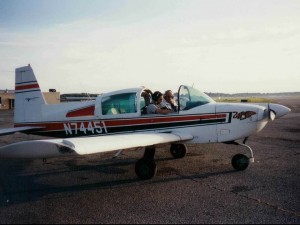 We were cleared for 7,000 and climbing in the clouds when suddenly something started banging on the airplane from outside and aft of where we were sitting. About the same time, I noticed that the needle on the number two VOR display wasn’t even close to being centered like the needle was on the number one display, even though both were set to the same radio frequency and on the same inbound radial.

Could the external antenna have come loose?

“Look out there,” my dad said, pointing a finger at the light ice buildup on the angular metal probe attached to the outside air temperature (OAT) gauge. He had gotten his wish.

Just then, we popped out of the clouds and were on top. The sunshine quickly melted the ice, the banging stopped, and the number two nav radio problem cleared. Erie Approach cleared us for the non-precision approach to Runway 24 at Dunkirk, a small uncontrolled airport with two runways and a VOR on the field. We landed, I pulled on the radio antennas to make sure they were secure, got an updated weather briefing, filed IFR to Jamestown, and then we took off once more into the wild dark-grey yonder.

Jamestown, is a small uncontrolled airport with a restaurant on the field. Although only about 19 nautical miles from Dunkirk as the crow flies, to get to Jamestown from Dunkirk flying IFR, we had to first fly 18 miles from Dunkirk on Victor 265 to KRAUS intersection. A turn to 246 degrees would then line us up on the 6 ½ mile ILS approach for Runway 25.

The briefing in Dunkirk hadn’t mentioned icing on our route but the Tiger’s OAT probe was already starting to pick up ice again as we reached our assigned altitude, immersed in a sea of dark grey.

I leveled out at 6,000, still surrounded by darkness.

“Erie Approach, 451 is level at six, still in the clouds and picking up ice.”

I pushed the throttle full forward and pulled back on the yoke.

The airplane was feeling sluggish now. I had pulled the carburetor heat full on, hoping the engine wouldn’t quit from ice blockage. The heat would account for a slight decrease in engine power but not the poor climb rate we were experiencing now. Even with full throttle, the Tiger could only make it to 6,700 feet. Now, I struggled to keep us from descending.

If only we could get somewhere warm to melt this crap, I thought. Lake Erie was nearby and the waters were still open. If I could get us into the warmer-than-freezing air just above the lake, maybe enough ice would melt so we could fly to the closest airport and land.

“Erie, 451 would like vectors to Lake Erie before the aircraft becomes unflyable.”

“451, Erie Approach. Instead of vectors to the lake, I can give you a vector that will take you out of the cloud mass.”

“451 will take whatever will get us out of the ice the quickest,” I radioed back. “I don’t know how much longer the airplane will be flyable.”

I accepted a northeast heading, made a slow coordinated turn, then Erie called back with a question.

I had been in total control of my thoughts and actions right up until the moment he asked the question. Now, my mind raced through the implications. I saw tomorrow’s headline, a picture of a smashed airplane, and the story about how the air traffic controller had confirmed that there were just two people in the airplane at the time of the fatal crash.

I looked over at my dad. He looked back at me. Then we both laughed!

We’d been in dire situations before, he in the Navy and me in the fire department. I guess after facing the possibility of death a few times and coming out alive, you tend to get cocky. Why not gloat when you make it? We knew there would come a time when death would win. You can’t change that. We simply chose to make death powerless over how we live by laughing when it stared at us from the darkness at 6,700 feet.

I held up my hand to tell my dad to stop laughing for a minute so I could sound serious on the radio then thumbed the transmit button on the yoke.

A few minutes later, I keyed the mic again.

Erie Approach, how much longer at this heading should 451 expect to be out of the clouds?

The radio was quiet for too long before the reply.

I’m pretty sure at this point the controller’s supervisor took charge because we received a new vector that reversed our course. As it turned out, the initial vector ATC had given us had been driving us deeper into the mess.

I made the 180 degree turn and quit struggling to keep altitude after being cleared to descend to 4,000. Within minutes, a partly cloudy sky with the sun looming large on the western horizon welcomed us. The Tiger still had a load of ice on the airframe, so I couldn’t relax just yet. The added weight and degraded flight surfaces meant I still had to focus on flying the airplane and making the approach and landing at Jamestown.

I intercepted the glideslope on the ILS for Runway 25 feeling the effects of 30 knot winds and noticed that none of the ice we had accumulated was breaking off or melting. Luckily, ice hadn’t reduced forward visibility through the canopy and I could see the runway ahead. If I could keep the airspeed higher than normal for the approach and leave the flaps alone, I figured we had a pretty good chance at not crashing short of the runway.

Soon, a large white number 25 slid under the Tiger’s belly and I heard the chirp-chirp of rubber tires kissing the asphalt. The landing had become a white-knuckled non-event. I taxied to the ramp by the restaurant and shut down the engine. My dad and I slid the canopy back and stepped out to get a good look at the Tiger. 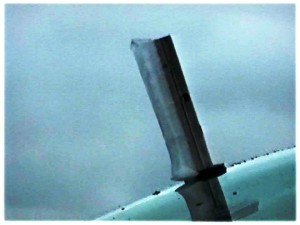 An inch of ice on the OAT probe and at the wing roots, in addition to a five-eighths inch buildup on the leading edge of both wings and on the antennas, still refused to melt.

Although there was still some ice on the aircraft after we finished our meal, my dad and I were able to clean off what little that remained and then enjoy an ice-free flight back to our home base. 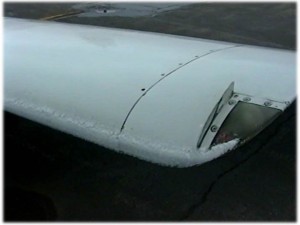 The following are my confessions.

I should have told ATC and the flight briefer (when we were on the ground at Dunkirk), about picking up ice the first time. Because it had been minimal and had melted as soon as we got on top, I didn’t think it was important at the time. I was wrong. If I’d given the icing report, then other pilots would have also been warned when getting their briefing.

Even though it wasn’t mentioned in the briefing, after picking up ice en route to Dunkirk, I should have been wary of ice on the flight to Jamestown and either waited on the ground for the clouds to pass or stay out of them if continuing the flight.

I should have declared an emergency as soon as I had a problem with keeping the aircraft at altitude.

Finally, I should have had better positional awareness. Instead of blinding following ATC deeper into the clouds, I should have known where to expect the nearest VFR conditions.

1 thought on “Two Souls Above Jamestown”