Stan, the President of Galion Air and I planned to fly to Winter Haven, Florida in the company Cessna 182 on Monday June 6, 2016. I offered to plan the flight and had put together a route that would take us from our base at Galion, Ohio to Athens, Georgia for our only fuel stop, and then on to Winter Haven.

Sunday June 5th, tropical storm Colin suddenly popped up in the Gulf of Mexico. Hoping it would die out or veer away from Florida, I got up at 4 a.m. Monday morning to get a weather briefing for our proposed 6 a.m. departure. The briefing confirmed Colin was headed for the mid-section of Florida so I let Stan know that today was a no-go but hoped we could try again tomorrow.

As predicted, Colin slammed into Tampa on Monday with 40-60 mph winds, taking down trees and power lines. Tuesday morning’s 4 a.m. weather briefing revealed that Colin was now spinning in lots and lots of rain and low IFR ceilings as he continued on his way to the Atlantic. The mid-section of Florida was getting the heaviest rains and flooding. Again, I let Stan know that launching in the 182 would not be a good idea. Since he had obligations to fulfill in the Winter Haven area, he decided to take a commercial flight. I told him if the weather got better by Wednesday, I’d fly the Skylane to Florida and the two of us could fly back over the weekend. But the weather patterns over the Orlando/Tampa area continued to bring heavy downpours and thunderstorms that I didn’t want to try to pick my way through at the end of a 6 hour flight from Ohio. So, I stayed home and Colin entertained Stan until he flew back on an airliner.

Unable to accept defeat, we planned another trip to Florida for the first week in October.

We met at the Galion airport (KGQQ) at 6 a.m. on Saturday the 1st. I had filed IFR and needed to get my clearance. Usually, I just called Mansfield Clearance on the RCO (Remote Communication Outlet) frequency but I had never tried to get a clearance when the tower at Mansfield was closed for the night. According to the approach plate, when the tower is closed and you want to make an IFR approach into KMFD, you call Cleveland Center. So I figured that would also apply to getting a clearance. I called Cleveland Center on my cellphone while in the plane. Cleveland told me that I needed to contact Mansfield Approach for my clearance. I told them the tower was closed until 7 a.m. They then called Mansfield on the phone and confirmed that they open at 6 a.m. not 7. Embarrassed at my mistake, I quickly thanked Cleveland for their assistance and then tried calling Mansfield on the RCO frequency.

The morning weather briefing had shown that airport weather stations along our route in Ohio, West Virginia, and Kentucky were reporting lMC and low IMC mostly due to fog but I could see stars above Galion, so I figured I’d climb VFR to pattern altitude and get my clearance from Mansfield while airborne. Finally, Mansfield Approach answered and provided my clearance to Athens, Georgia.

As the sun came up, Stan and I enjoyed smooth air and clear skies above a deck of fog and broken undercast. As forecast, the fog and broken clouds cleared as we entered southern Kentucky into Tennessee and skies were clear for the rest of the trip. After our fuel stop in Athens, Stan took the left seat and flew VFR with flight following to Crystal River, Florida where he was to meet friends he would be staying with. From Crystal River, I flew solo to Winter Haven under a 4,000 foot ceiling that was growing thunderstorms for the evening. 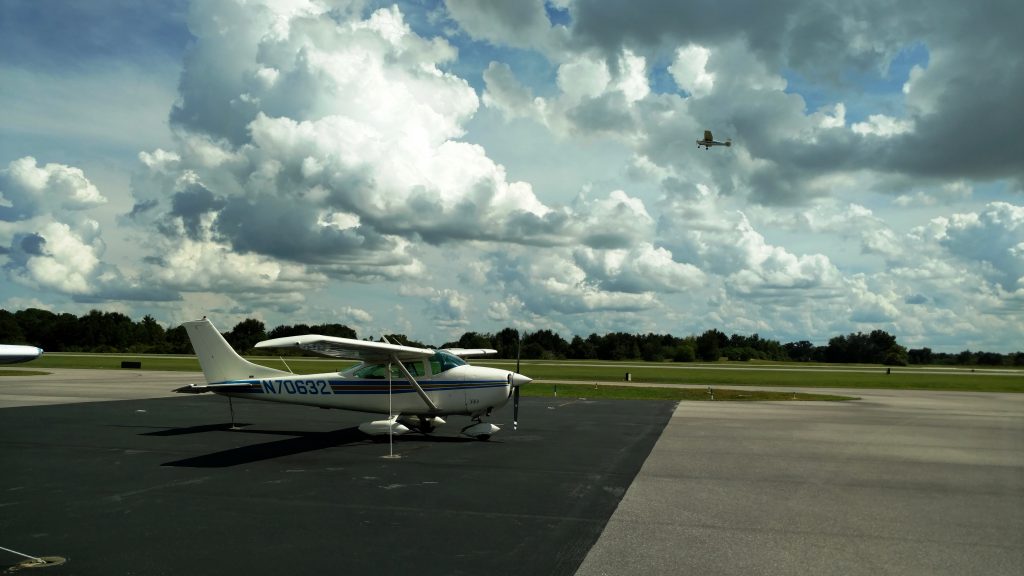 Tied Down at Winter Haven (KGIF)

The plan was to spend the week with my son who lives near Winter Haven while Stan spent time with his friends. I would leave early Friday, fly to Crystal River (KGCG) to pick up Stan, and then we’d make our way back to Ohio.

Hurricane Matthew, however, had other ideas.

By Monday, it was all but assured that this monster was going to create havoc for Florida and points northward. Florida’s governor was so convinced, he had already issued a state of emergency even though Matthew wasn’t expected to reach Florida until Thursday into Friday.

I let Stan know that I couldn’t guarantee that we’d be able to get out of Florida in time to have him back to work on Monday next week unless we left Tuesday morning ahead of Matthew’s weather influence. Forecasters were also predicting that Matthew could circle back to Florida after strafing the coasts of Georgia and the Carolinas. I explained that if we stayed past Tuesday, we might have to remain until sometime the following week. At the end of our discussion however, we both agreed to stay and hope that the dire predictions would fizzle out.

But by Tuesday night, the forecasts were holding. I checked weather along the route back for a possible return flight on Wednesday. All of Florida from Tampa to Georgia was expected to be IFR, with the rest of the route VFR. The other factor I had to consider was that Winter Haven couldn’t guarantee hangar space for the Skylane when the high winds and heavy rains came. Being a transient, I figured they’d rightfully give priority to the regulars and I’d probably get bumped back out if I ever did get in.

I made the decision to cut my stay short by two days and head back. Stan however, told me he had a business appointment scheduled for Wednesday and would take a commercial flight back to Ohio.

Around 7:30 Wednesday morning on the ground at Winter Haven, packed, and preflight complete, I tried using the GCO (Ground Communication Outlet) frequency on the field to contact Tampa Approach to get my IFR clearance. The ceiling was about 400-500 feet so I wouldn’t be able to take off without it. As Yogi Berra liked to say, it was déjà vu all over again. There was no answer on the radio after multiple attempts just like in Galion five days earlier. Not having experience with a GCO, I figured it was just another form of an RCO like the one I was familiar with in Galion. I was wrong.

I didn’t know it at the time, but a GCO is a radio-to-telephone link. In order to activate it, you have to key the microphone a certain number of times. The clicks activate the link and then you can talk. Since I didn’t make the mic clicks, I never made contact with Tampa Approach. After much research back in Ohio, it finally took a call to Winter Haven to determine that it takes 4 clicks to activate their GCO but it wouldn’t have mattered even if I had known it at the time I needed it. The system had been inoperable for some time.

Since I didn’t know the phone number for Tampa Approach, I called up Flight Service on my cellphone. They then gave me the National Clearance Hotline phone number which enabled me to get my clearance and a void time. Soon, I was at 8,000 feet and above the clouds, basking in bright sunshine from clear skies above. 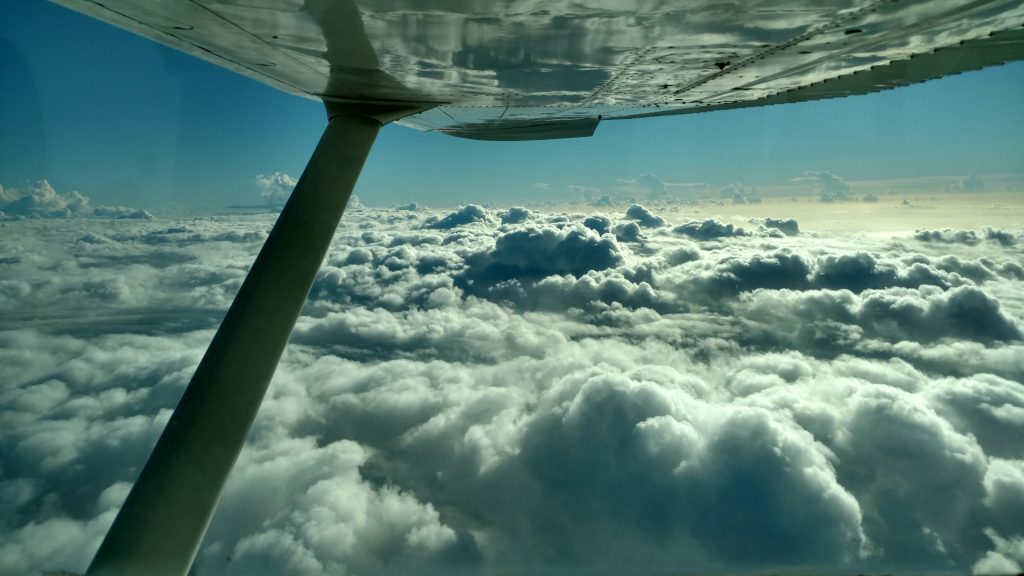 Above Florida as Hurricane Matthew Approaches

I listened to ATC vector civilian aircraft around the many MOAs along my route as they became hot and also heard ATC clearing military aircraft to operate within the MOA boundaries. After crossing the Blue Ridge Mountains, Knoxville Approach’s radar equipment dropped offline and I had to radio altitude and reporting points along my route until I was handed off to Huntington Approach. The controllers shortened my flight time by granting some requests for direct-to shortcuts and by offering some of their own. One of the shortcuts I was surprised to get was offered by Columbus Approach. They cleared me direct from ROHDE intersection to KGQQ. That put me perpendicular to and over the top of the final approach path for the airliners they were controlling, providing dramatic views of landing commercial flights.

I had made it back safely but I still needed to keep track of the hurricane and Stan’s progress. Some Florida commercial airports closed on Thursday ahead of Matthew (Orlando closed at 8 p.m.), and I’m sure there were plenty of people vying for the remaining flights out, but Stan managed to get a seat and arrived safely in Columbus Thursday afternoon.

Perhaps next year, we’ll plan another trip to the “Sunshine” State. Perhaps we’ll get introduced to another storm by name. Perhaps Winter Haven’s GCO will be repaired and I’ll get to make 4 clicks to connect the Skylane’s radio to Tampa’s telephone.

Perhaps, the weather will be so spectacular it won’t matter.