While at home during some passing storms, I checked some of the weather features of my GDL 39 3D. 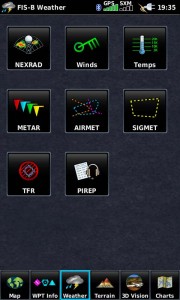 Here is the Weather Products page. I decided to check for pilot reports.

On the map page used when navigating, I found a couple of pilot reports which are depicted by a small square. A small green square, I found out, indicates a general pilot report. A yellow square indicates significant information. And although I didn’t find a red square today, it would be reasonable to think it would hold extreme importance. 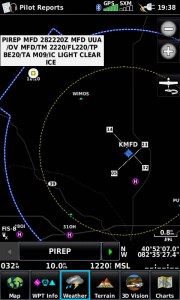 This screen shows one of the pilot reports I found. A yellow square near Mansfield, Ohio indicated a pilot report of interest so I clicked on it and got the on screen report as you see. Although I don’t fly at the airline altitude, the report is still significant because with 89 degree temps on the ground, it indicates the extent of the precipitation/atmosphere instability.

Other items I that popped up on the navigation map screen were Airmets and Sigmets. You can toggle these on or off.

Initially, you will see a yellow dotted triangle or other defining figure. Click on the dotted line to get the Sigmet information. 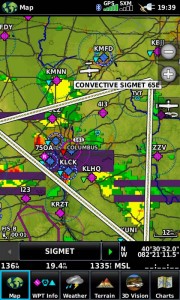 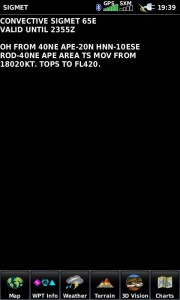 That’s all for now. I’ll report more as I gain more experience.