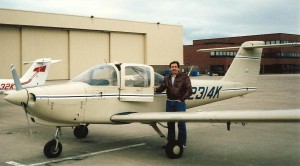 The air is clear and a huge orange moon sits on the eastern horizon as I take off from Cuyahoga County airport. Aside from the ethereal voices on the comm radio, my only companion tonight is my flying partner, a two seat, single engine Piper Tomahawk with the call sign N2314K (pronounced November-Two-Three-One-Four-Kilo).

The tower controller radios final instructions before I leave his airspace.

“One-two-four-point-three,” I confirm. “Thanks, and have a good night.”

I reach over to change the frequency with my right hand as we continue to climb. The soft red glow of the flight instruments protects my night vision as I check the altimeter. We need to stop at 1,800 feet so we can scoot below Cleveland Hopkins airspace. Below us is the obsidian water of Lake Erie. On our port side, about a mile away, is the illuminated outline of Ohio’s northern shoreline. Out in front and on the starboard side is total blackness, nothingness, eternity.

The air is as smooth as silk and I feel as if I’m riding on a purring magic carpet. Although I can’t directly see other aircraft or hear their engines, I can see more than a few pulsing white anti-collision strobes, blinking red beacons, and the steady luminous red and green position lights where the tips of their wings are.

Cool night air streaming through the vents, feels good against my face as I send my voice into the heavens to someone who can see and identify me out of all the other pilots and airplanes flying out here tonight. That someone is watching over us, giving us guidance (but cannot physically intervene), is comforting.

A voice reaches back through the heavens and grants my request.

As the Tomahawk and I edge closer to the shoreline, the streetlights, make the city look like the roads are paved with molten gold. Ahead, the lights of the Terminal Tower, the Rock and Roll Hall of Fame, and Cleveland Browns Stadium sparkle like multicolored jewels set among all the gold.

It’s time. I pull the throttle back to slow the aircraft to approach speed, lower the flaps, and the Tomahawk begins to descend out of the night sky. My aiming point is the parallel strings of steady white lights ahead with the flashing white strobes at the near end.

Suddenly, a shooting star streams across the sky above of us just before the Tomahawk’s landing light illuminates a large white “24L” against a black background of asphalt. We slip smoothly over the runway, hanging but a few feet above the surface of planet earth for as long as we can, until, once again, the main tires give a short chirp chirp.